By ROGER A. BONAU, MD, FACS

Up to 50 percent of patients will develop Post Thrombotic Syndrome (PTS). Symptoms include leg swelling, pain, cellulitis, dermatitis, and venous leg ulcers. Venous ulcers affect more than 2.5 million patients yearly in the U.S. It is the most common lesion treated in wound care centers. The combined costs of treatment, work absence, and ongoing disability are high and annually increasing.

The more proximal the lesion, the more severe the symptoms and sequelae. Infrainguinal thrombosis is relatively simple to diagnose, but more proximal thrombosis involving iliac veins or the inferior vena cava is much more difficult to diagnose and requires a high index of suspicion. Unilateral leg swelling may represent occult proximal thrombosis or disease. Compression of the left iliac vein by the overlying artery (May-Thurner Syndrome) is now thought to be a risk factor for DVT and may explain the propensity for DVT to develop in the left leg.

Treatment of the acute DVT is best determined by location of lesion, symptoms and comorbid conditions. Aggressive mechanical and pharmacologic lysis of thrombus along with stenting of residual lesions is the treatment of choice in severe acute ilio-femoral DVT in the appropriate patient. Treating lesions with lysis is thought to reduce the incidence of PTS by decreasing wall injury and preserving valve function. Compared to anticoagulation alone, thrombolysis improves the quality of life and decreases PTS. 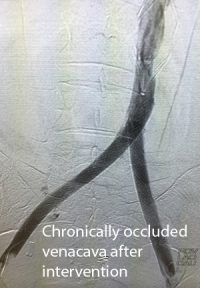 However, many patients are not offered lytic therapy. In addition, most patients were treated more conservatively in years past. As a result, ongoing venous obstruction or frank occlusion remains a common problem in the U.S. Chronic ilio-femoral obstruction following DVT is common. Proximal venous obstruction is the primary cause of PTS and a third of cases. Residual obstruction and reduction of flow is an additional risk factor for recurrent DVT. Anticoagulation and compression stockings are the only conservative measures available. Historically, surgical procedures including bypass and surgical phlebectomy have occasionally been offered with relatively poor results. Newer treatment options are now available, but patient and physician awareness is still lacking.

Iliac vein stenting has replaced surgery as the treatment of choice for chronic DVT. The use of stents to treat non-thrombotic vein lesions, such as compression, achieves patency rates of 80-100 percent. The use of stents to treat chronic outflow obstruction or occlusion has only been reported in numbers for the last 10 years. Sporadic case reports have also demonstrated the feasibility of stenting an occluded or stenotic inferior vena cava. Secondary patency rates approaching 90 percent have been well documented.

Conventional diagnostic testing such as CT, MRI, ultrasound, and venography may under call the severity of the pathology. Intravascular ultrasound has been found to be a crucial adjunct in the treatment of venous disease. Likewise, conventional endovascular principles developed for arterial lesions may not apply in venous obstruction.

The evolution of venous treatments has led to the creation of “Venous Specialists” within the realm of vascular surgery. A recent international symposia convened with the goal of reducing complications of thrombotic venous disease by 50 percent in 10 years. Practical measures to achieve these objectives included recommendations for the early referral of patients to Venous Specialists and to include directed education of primary care physicians to refer these patients to specialized centers. In the last year, more than 100 patients with varying proximal venous lesions, including four with completely occluded inferior vena cava, have been treated successfully by physicians at The Vein Centre.

Improving venous outflow obstruction is increasingly becoming the treatment of choice in patients with PTS. Further evolution of stent construction, diagnostic tools, and specific techniques will continue to revolutionize the treatment of venous diseases.

Roger A. Bonau, MD, FACS is a vascular surgeon with The Surgical Clinic, PLLC and a clinical associate professor of Surgery at UT-Nashville. Board certified in general surgery and vascular surgery, Bonau graduated from Tulane University School of Medicine, completed internship and residency at Vanderbilt University School of Medicine (VUSM), followed by fellowships and Memorial Sloan-Kettering Cancer Center and at VUSM. For more information, go online to tsclinic.com or veinreliever.com.